The Austin soccer world was saddened today with news of the passing of longtime local coach Murray Hanson.  Originally from Canada, Hanson initially came to Austin as part of the Coerver Coaching program’s work with the Round Rock Crossfire.  He was a long time staff member of the Lonestar Soccer Club, and was also involved with Cen-Tex Soccer training.

Hanson is believed to have passed away from complications of a long-standing heart condition.  Arrangements are pending.

For years, working with select, college and Olympic Development players, I was always amazed at the eagerness of players, and even coaches, to play the ball away on the first touch.  While we see many examples of one touch play at the professional and international levels, effective one touch soccer among youth players is a rarity.  I do not believe that is because youth players are incapable of making one touch passes. I would suggest, instead, it is because they are not trained to make good decisions about when to play with one touch and when to take two or more touches.  I would also argue that if properly trained, we would see two things happen.  First, the number of balls played first time would sharply decrease.  At the same time, the success of one touch play would sharply increase.  In support of that argument, let’s look at several one touch situations.
END_OF_DOCUMENT_TOKEN_TO_BE_REPLACED

Over the past 20 years, I’ve accumulated a thick binder of practice plans.  Some are handwritten, some are typed out.  Regardless, all of them have a common denominator: my poorly drawn diagrams of different drills or training exercises.  Picking up a plan from 10 or 15 years ago, sometimes I struggle to decipher what I meant when I drew a diagram.  I can imagine the difficulty anyone who uses one of my training sessions would have in understanding my diagrams. 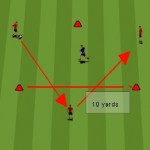 nst that backdrop, I decided it was finally time to invest in something that would let me better illustrate a practice plan.  Searching the internet, I came upon a British company called CoachFX.  Their website drew me in with examples of animated training sessions, video to computer replications of games and other such fancy things.  But that is way beyond what I need.  I just want to draw cones and lines that make sense when you look at them.

END_OF_DOCUMENT_TOKEN_TO_BE_REPLACED

The ability to play with confidence with the ball at your feet is the foundation of almost every other soccer skill. Passing, receiving, even shooting rely on a player’s ability with the ball at their feet. Yet, it often seems that no sooner has a player learned how to dribble than we begin trying to coach it out of them! If you look at the coaching curricula being developed across the U.S., the U6 curricula consistently aim to create confident, creative players with the ball at their feet. In some states, the entire U6 curriculum is designed to do nothing more than develop competent dribblers and encouraging players to take risks with the soccer ball.

While other skills are introduced at U8 and basic tactics become part of the curriculum at U10, this does not mean that the training, and encouragement, of dribbling technique should end with U6s! To the contrary, every U8 and U10 coach should spend some time early in the season working on dribbling technique. Every player in every position, from goalkeeper to forward, needs to be able to dribble the ball. As players get older, we often ask our outside defenders to take space and attack with the ball at their feet. If we are going to ask them to do that at U14, we can’t be coaching our U10 defenders out of dribbling! There is an old saying: “a good dribbler will get you out of far more trouble than he will ever get you into.” This is so true, and we as coaches need to recognize those players who are confident enough to dribble and encourage them. We must create an environment where the reluctant dribbler is willing to risk and to try.

END_OF_DOCUMENT_TOKEN_TO_BE_REPLACED

With practice getting underway, let’s looks at a few common drills that you can find coaches all over the U.S. using in youth practices, and why they shouldn’t be used! A lot of drills were created a long time ago without much thought to what, if anything the drill teaches and whether it instills more bad habits than it teaches productive skills. For each drill, I’ll also suggest an alternative that should teach the same skill, but with fewer unintended consequences!