Thanks for the many e-mails about the forum status.  I was out of touch in trial for two weeks and just now am catching up.  We’ve had a problem with our database.  A contractor has been engaged and we hope to have the forum up and running in 48 hours. 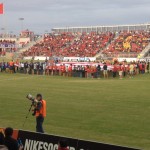 Let’s start with the highlights of the evening, which would be the stadium experience.  Toyota Field is simply amazing, and the Scorpions organization is to be highly commended, not just for creating this intimate and engaging stadium, but for pulling off what has to be one of the smoothest openings of a venue in recent memory.   Traffic to Toyota Field was amazingly manageable, even though we arrived from Austin just 30 minutes before game time.  Directions to parking were clear, and the parking at the NEISD stadium complex was free! END_OF_DOCUMENT_TOKEN_TO_BE_REPLACED

The Coastal Bend sent 17 teams to WD playoffs this past weekend. Two of those teams came away with championships. The VYSO Heat 95 won the girls’ U18 Super II Championship and the Santa Fe Revolution won the girls’ U14 Championship. Both teams will be traveling to state playoffs this weekend. Good Luck to both of you. Here is a breakdown of the teams that went to playoffs (based on my reviewing the playoffs page, I apologize if I missed anyone) Padre – 8 teams; VYSO – 4 teams; Santa Fe – 2 teams; Tri City – 2 teams; and Gregory Portland – 1 team.